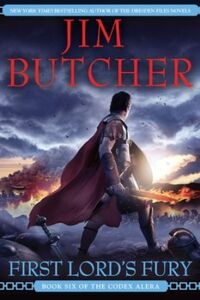 First Lord's Fury is the sixth and final book in the Codex Alera series. It is written by Jim Butcher and was published in 2009.

The Vord have taken Alera Imperia, Capital of Alera, pushing the remaining Alerans to their knees. With the remaining legions of Alera and thousands of refugees pressed to their last stand, Tavi races to assist his beleaguered people.

Set a few months after the end of Princeps Fury, First Lord's Fury continues the desperate struggle of the Alerans against the Vord.

Still on the return journey from Cania, Tavi undertakes advanced furycraft training from Alera on the giant ice ships of his fleet. He also plans his counterattack against the Vord and the logistics of landing, transporting, and supplying the combined forces of the Alerans beneath his command and the remaining Canim aboard his fleet. Amidst all these great challenges, it turns out his most difficult problem is his relationship with Kitai, who decides she wants a proper courtship from the new First Lord of Alera.

Amara and Bernard join the forces defending Riva under the leadership of the new Princeps: Aquitane Attis. Though they held the defenses at Riva for a time, the Aleran forces retreated when the Vord channeled a host of wild furies toward the city. The Aleran forces fell back to Garrison, where the defenses Bernard created over several years of preparation for the Vord gave the Alerans a fighting chance against the incoming tide.

While the Vord attack the defenses in the Calderon Valley, Tavi devises a way to travel the length of the shield wall in a matter of days instead of weeks. After traveling to Riva and breaking down the gates of the great city, Tavi and his companions plan a counterattack against the reserve forces of the Vord Queen in a desperate attempt to find the queen and end the war.

Retrieved from "https://codexalera.fandom.com/wiki/First_Lord%27s_Fury?oldid=4531"
Community content is available under CC-BY-SA unless otherwise noted.