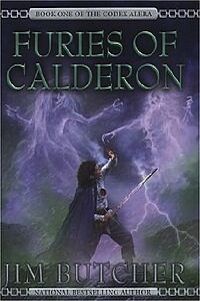 Furies Of Calderon is the first book fo the Codex Alera series. It was published in October of 2004 and written by Jim Butcher.

In Alera, there are crafters, people who control the elements through their bonds with the elements' fury. The First Lord Gaius Sextus of Alera, is getting old and weary, and runs the risk of losing Alera to the races that threaten it--for one, the savage Marat. Tavi, a fifteen-year-old boy struggling with his inability to control the elements, is caught up in the middle of a wind fury, he saves the life of Amara, who he believes to be a runaway slave but is actually a spy for Gaius Sextus, gathering information on traitors who side with the Marat. She realizes that Tavi's good nature, intelligence and resourcefulness could save Alera after all.

Amara is a Cursor on her graduation test, which is to carry out a real life espionage mission under the supervision of her teacher, Fidelias. Amara chooses to investigate the rumors of a rogue Legion. However, Fidelias betrays her, and she is captured. Eventually, she escapes and succeeds in contacting the first Lord, who orders her to Calderon valley to warn the inhabitants of the invasion. Tavi is a shepard who has lost his sheep while helping a friend, and is taken by his uncle Bernard to find them. They are attacked by Marat and Tavi must distract the Marat to sending Bernard back home safely. Tavi saves Amara (masquerading as a slave) and they recover from a fury storm in the Princeps’ Memorial. Fidelias speaks with Aquitaine and exposes Aquitane's assistant as a traitor. Back at the Steadholt, Isana stops a fight between Steadholder Warner & Steadholder Kord. When the Furystorm comes, Kord tries to use firecrafting to stop the healing of Bernard. Isana successfully drives off Kord and his family, and saves Bernard’s life with her watercrafting. Fidelias, Aldrick and Odiana arrive at Calderon valley and talk with Atsurak, chieftain (cho-van) of the Herdbane clan of the Marat. They arrive in Bernardholt.

Isana and Bernard seem to think something is coming in regards to Tavi along with Amara and Fidelias’ arrival. They hint that Tavi should know something important. Tavi and Amara run from Fidelias.Tavi is attacked by Kord and his sons at the Rillwater. Tavi is nearly drowned by Odiana, but Isana saves him. Aldrick kills Bittan while Fidelias moves to attack Amara and Bernard. Tavi escapes only to be captured by the Marat. Isana floods the area and stops the fires Bittan started. Bernard and Amara share a night in a cave; romance blooms between them. Isana and Odiana are captured by Kord, who intends to rape them and keep them as slaves. Tavi is to compete against Kitai in a Battle of Wits in the Valley of Trees (Wax Forest). Amara and Bernard arrive in Garrison and are framed for an attack.Isana and Odiana escape from Kord.

Tavi and Kitai enter the 'croach', or the wax forest. Tavi figures out that the wax spiders attack from sudden movement and heat signatures. Tavi works with Kitai, who is revealed to be a girl, and he gets the Blessing of Night. In the process, he wakes something up when he cuts his hand on a mushroom and bleeds on the croach. A strange creature attacks them both, poisoning Kitai. Tavi is forced to use his Blessing of the Night to heal Kitai, while Doroga drives off the creature by throwing a massive boulder. The Garrison is being attacked by the Marat and sustains heavy casualties, despite using earthcrafting to raise the wall. Kord follows Odiana and Isana, and tries to kill them while Doroga challenges Atsurak for control of the Marat. Doroga kills Atsurak and calls off the primary attack, while Kord is killed by Horse clan Marat cleaning out the Garrison of Herdbanes.

Retrieved from "https://codexalera.fandom.com/wiki/Furies_of_Calderon?oldid=4502"
Community content is available under CC-BY-SA unless otherwise noted.